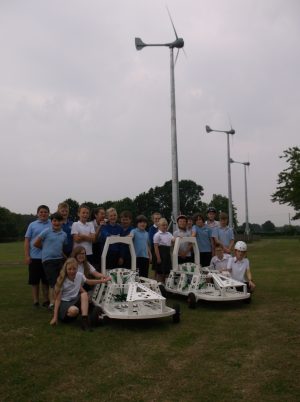 Between the 10th and 14th July a three-race series took place between the year six Goblin Racers of the ‘Dragonites’ and ‘Fast and Furious 10’ teams.  The teams have worked on their cars for over a month in preparation for this big event and there would be no-holds-barred with fierce competition expected.

Rules: One hour to complete as many laps as possible.  All drivers to be used.  Maximum of five laps per driver in one stint at the wheel.

The Dragonites got off to a flying start and by the quarter way mark had opened up a four laps lead over the Fast and furious 10.  By half-way, the gap was increasing with six laps separating the teams.  It appeared that the Fast and Furious car was running slower and the team were having problems making swift driver changes.  The dragonites led a faultless campaign throughout the race and at the finish had increased their lead to an unassailable eleven laps.  First blood to the dragonites! 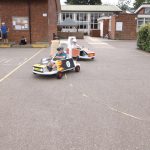 Rules: Three named drivers from each team to complete five laps in the quickest possible time out on their own on the track.

This race was much closer.  The first two drivers, one from each team, completed their five laps within five seconds of each other with the Dragonites squeezing in the quicker time.  Disaster struck with the second pairing as the Dragonite steering column snapped and the car left the track leaving the fast and furious 10 to romp home with an easy win evening up the score at 1 victory a piece.  Unfortunately for the Dragonites, they could not manage to get their car repaired in time to make the last time trail leaving the Fast and furious 10 with a walk-over.  Final score 2-1 to the fast and furious 10, leaving the race series evenly poised going in to the final round. 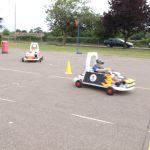 With the circuit tight and overtaking awkward a good start was always going to be the key to winning.  During the racing it was indeed the driver who got the best start and the inside line into the first corner than came out the victor.  Going into the last of the races the scores were dead level and the pressure was on the last two drivers to deliver the goods.  The Fast and Furious 10 got off to the better start and lead going into the first corner and for the next three laps with the Dragonite car hot on their tail desperately trying to find somewhere to pass.  On the fourth lap a chink opened up on the inside and the Dargonites managed to squeeze through much to their opponent’s annoyance!  The last lap reained tight and went right down to the wire, but the spoils went to the Dragonites winning 5-4. 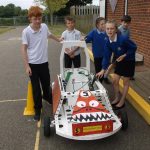 In the end it was the Dragonites who won the closely-fought three-race series by a margin of two races to one and so win the 2017 Goblin Cup.