At first we sorted out all the nuts and bolts, there were over 1000 of them and it took us 20 minutes.  Later we decided to sort out all of our tools into our tool box such as: a set of spanners, pliers, adjustable spanner and screwdrivers.  We then got all of the basic chassis frame work done.  We did make a tiny mistake but later figured it out and learnt something from it!  We now tighten all the bolts finger-tight (not fully tight just in case of another mistake!) 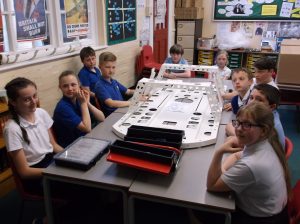 We started to design the logo for our team in our sketch books.  The head of design person is now in the process of making the actual logo.

At present the engineering team are starting the side paneling and framework and bolting the sloped front part of the cart together to allow the steering column and rack to be fitted. 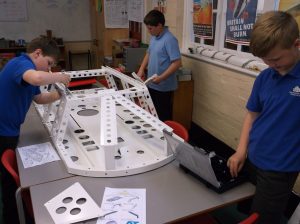 The steering mechanism is now complete, and we have fitted more nuts and bolts – they are all tight and right!  Now we’re now fitting the front wheels and assembling the rear axle and it’s all going pretty well. 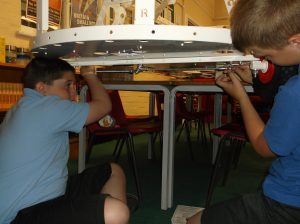 The braking system was installed, the main drive pulley and belt on the rear axle which was then bolted to the rear of the chassis.  We did make another mistake at this point though as we put the rear axle in the wrong way round and had to take it out and turn it round.  Another lesson learnt! 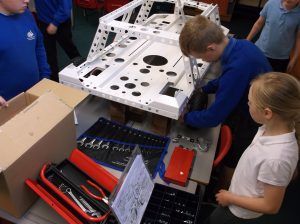 We completed fitting the rear axle and wheels and it all works.  There was a problem with the front wheel alignment and we had to spend a lot of time getting that adjusted right. 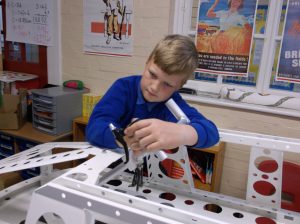 It was now time to assemble the ‘motor housing’ with two relays, a fuse and the man battery cut-out switch.  It went well and looks pretty good.  Next will be fitting the electric motor itself. 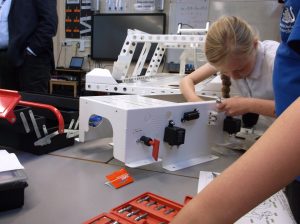 The motor was fitted, which was quite heavy!  We then try to fit the small pulley wheel to the motor but unfortunately some of the team got carried away and tried to whack it on with a hammer and bent it.  Mr Vokes is having to take it home and file it out so it will fit!  We didn’t get quite as far as we’d hoped, but the cart is starting to look like a cart now. 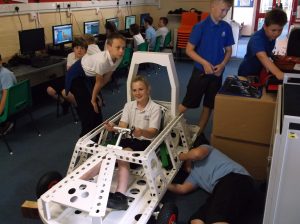 The cart is up and running!  It works pretty well although there are a few minor adjustment to make to the brakes and pulley system off the motor that drives the rear wheels – it seems too tight and we’ve less power and top speed compared to the other team?  We’ll work on this.

Still, we managed to get plenty of testing in and practice driver changes ready for the first (endurance) round of the ‘Goblin Race Series’. 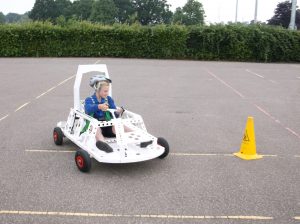 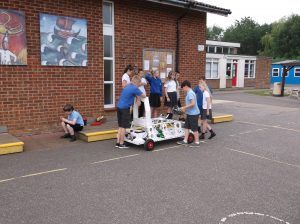 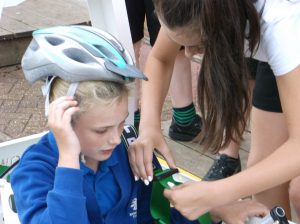 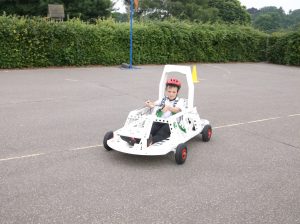 We sorted the drive belt and it goes much better, but still not as fast as we’d hoped.  Anyway, the car is reliable and should do the hour long endurance race without a problem.

The bodywork was fitted and the car looks great!

We managed to get a few final test laps in and put a bit more air in the tyres which seems to have added a few mph to our top speed.  The car (and drivers) are as ready as they’ll ever be! 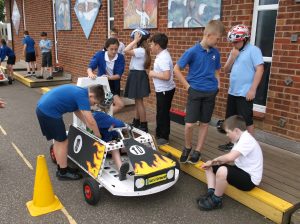 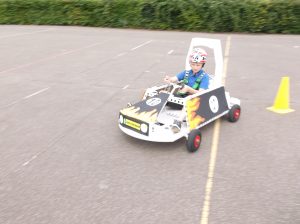