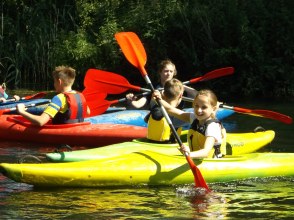 Kayakers on the River Bure at Hautbois.

Year six returned from Hautbois today after a fantastic week of exhilarating adventurous activities and five days under canvas. There were many highlights during the week, but perhaps most notable was the fact the Mrs Brandwood had to be taken away in an ambulance on the Wednesday because she has such bad indigestion!

The activities ranged from those on the water, like kayaking and canoeing, to those up high like abseiling, climbing and the zip wire. There were one or two white faces on the top of the abseiling tower, but everyone had a go at everything and learnt something about themselves in the process. The food was great (thanks Mr Vokes) and those that were there certainly appreciated the energy provided by his special egg and bacon baps in the morning – maybe that was Mrs B’s problem!

Jack Syer won the award for the most capsizes in the kayaks, beating the previous record of four dunkings, and taking it to an impressive five. Mind you, the raft building was equally eventful, with the A group’s raft lasting a mere thirty seconds before disintegrating into a pile of floating debris, littering eight bodies across the River Bure. It’s all part of the fun though, and everyone should be thankful that we have a swimming pool at Swanton Morley and everyone is a pretty decent swimmer!

To cap it all, the weather was great, warm and dry all week. Mr Vokes was dead chuffed that he managed to get all the tents down in the dry for once!

A great week was had by all, a thoroughly mind-blowing experience.